Is the terminology starting to get to you? Are you wondering what on earth bulls and bears have to do with trading markets?

In an effort to assist you in your navigation of the trading environment we’ve put together a bit of a dictionary to help you understand terms used throughout the trading course.

Arbitrage – Don’t do it! Other than that it means buying and selling immediately after to take advantage of price differentials. People usually take advantage of this with EAs and AIs because they can do the calculations much quicker. Be warned, most brokers consider arbitrage as cheating, they will hunt down rogue AI’s and ban the offending trader.

Ask and Bid – A currency pair that you are looking to trade will have two prices, ask and bid. A

Bear/Bearish – A bear is a trader who believes the market (asset, stock, etc.) is heading downward. So bearish means a market in a downward trend. 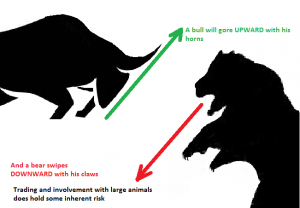 Bull/Bullish – In direct opposition to bears, a bull is a trader who believes the market is heading upward. So a bullish market is one that is in an upward trend

Hedging – Hedging is designed to mitigate exposure to risk of adverse price movements by trading the same commodity in the opposite direction or a related commodity in an offsetting position Consequently, reducing the risk factor. For example, you expect EURUSD to rise so you make a buy order

Lots – Just how much is a lot? More than a little. But seriously, in times gone by it was only really possible to trade in “lots” the standard being 100,000 currency units. For the small retail trader that was just not possible and kept them out of the game. These days most brokerages will allow trades in fractions of lots down to 0.01 lot (that’s 100 currency units), also called a micro lot

Pips, Points & Pipettes – the level by which traders identify increase and reduction of prices. Forex markets are so inherently stable that fluctuations have to be measured in tiny fractions. If EUR/USD moves from 1.1050 to 1.1051, that 0.0001 USD rise in value is ONE PIP. For the majority of currencies, one PIP is equal to the fourth decimal point, there are some deviations such as Japanese Yen (JPY) and Hungarian Forint (HUF). Some brokers will display the price in 5 decimal places (3 for JYP and HUF) and this final decimal point is a Point (sometimes referred to as a pipette). 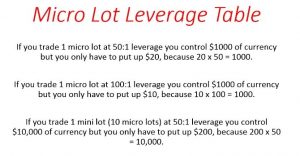 Leverage – you may remember the term from school in physics, the way you could use a long lever to increase lifting power. It’s pretty much the same with trading profits. You put up your “margin”, so your first trading account requires an initial deposit of €1000 but they offer leverage of 1:100 which means that if you have that €1000 in your account, they will allow you trade with €100,000, basically giving you a big lever to “lift” bigger profits. And when you close your winning trade, you give that 999, 000 back. Leverage is important in Forex because of the tiny movements in price action. You could trade €1000 and a trade that only moves 1 pip will make a whopping great €1 (not taking into account the spread). Not a lot to live on is it, if you’re trying to do this for a living. There is also additional risk when using leverage in that while trading with 100,000 units may make you a bigger profit it can just as easily wipe out your €1000 margin.

Spread – This is the difference between the bid/ask or buy/sell prices. When you look for a brokerage you will see that some have broader or narrower spreads than others. Some brokers will have narrow spreads which look inviting, but they will (in most cases) charge a commission fee. Other brokers have wider spreads but don’t charge commission. This is how brokerages make some of their money, they’re not doing it for free.

Stop Loss – This is the order to close a position when the trade is taking a losing turn and is beginning to lose more than the trader can afford. It is also a feature of most platforms that you can put this order in if you aren’t able to continually monitor your open positions and it will trigger automatically when the price action breaches this point.

Take Profit – This is the point when a traders believes his trade has either won enough, or there is an imminent change in trend ahead. This can also be automated for trades that are not continually monitored. You don’t want your currency pair reaching a profitable point only to immediately change direction when you weren’t looking.

Feeling a bit better about understanding the trading world? We hope this is a bit of information that you will find useful.

I’ve been trading the Forex markets since 2009. It started as a part-time venture, and through a lot of successes and failures, developed into a full-time endeavor.

Don’t Let Your Heart Fool You: How to Keep Your Emotions from Ruining Your Plan?
Josh Davis
WHERE STATISTICS AND FOREX MEET
Josh Davis

FOREX BASICS What kind of trader are you?
At the beginning of your trading quest you will be faced with a searing psychological question. As you look at yourself in the mirror, you will need to ask yourself the most quintessential question. Who am I…. as a trader? This is not the voice of some unexpressed existential angst. This is the critical
FOREX BASICS BULLS AND BEARS – A GLOSSARY OF TERMS
Is the terminology starting to get to you? Are you wondering what on earth bulls and bears have to do with trading markets? In an effort to assist you in your navigation of the trading environment we’ve put together a bit of a dictionary to help you understand terms used throughout the trading course.
FOREX BASICS MAKING HEADS AND SHOULDERS OUT OF PEAKS AND TROUGHS
Chart patterns, or price patterns, are formed by the changes in price activity of the asset you are trading, whether that’s stocks, commodities or currencies. There are essentially two main types of price patterns; continuation patterns and reversal patterns. Continuation patterns are used to identify if the market is taking a bit of a
FOREX BASICS How to Avoid Trading Scams?
Want to take out membership to the yacht-sailing, Champagne-drinking, Lamborghini-driving billionaire’s club? But can’t actually be stuffed learning how to trade the forex market? Well, then let me take the chance to welcome you to the SUCKERS club! You’ve been cheated left, right and center!  And I’ll just take those car keys, thanks! If 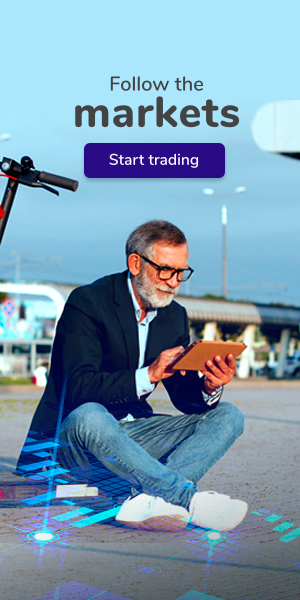